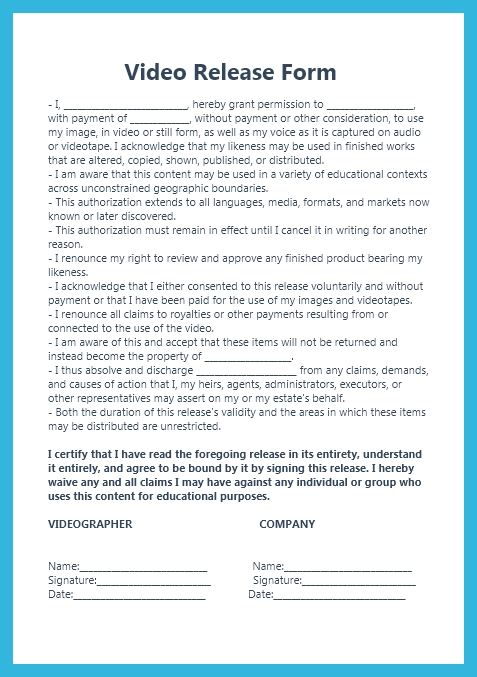 What is a Video Release Form?

A release form is a legally binding document that serves as a consent in writing to release the legal liability of a releasee by a releasor. Release forms are mostly used in photography or videography fields, in order to ensure that any content that is captured by an entity is owned by them and not by the workers who work with them on the project. Release form are essentials for a video because they help avoid future legal problems that can make the subjects withdraw their consent to use the footage after the product is completed.

A video release form will allow a third party to use the appearance and voice of a person for the benefit of the third party involved. After the individual has signed the document, the rights to the form of media are released to the third party. The owner of the video will get no compensation other than what is mentioned in the release form.

Video release forms have the benefit of covering still images, so all the basis will be covered from this release form as well. Furthermore, by making sure that you are on the right side of other’s property rights, you should position yourself to maintain your own when you release the videos. The release of content is also conditional on payment and generally there is a space in the form for the client to specify how much they would like to be paid in exchange.

Uses of a Video Release Form:

A video release form is used for the release of the following content:

How a Video Release Form works?

Things to include in a release form:

If you want the release form to be successful, you need to make sure that it includes all the important terms and conditions that will make it legally enforceable in court in case any complications arise in the future. The terms of a release forms are very simple and precise, and it does not have a long list of information that should be included.

A video release form is incomplete without the following things:

Other things that should be included in the video release form are:

Any creator that works with people in order to capture videos, images, or any form of media, needs a release form. Release forms are important to protect against legal repercussions and it makes sure that everyone is on the same page about everything. If you need help with a release form, make sure you contact a lawyer about it. Having a person from legal team will make sure that you do not miss any major terms in the release form.

When is a video release form signed?

A video release form is signed by the people involved in the creation before the beginning of the project. Until you have the consent and signature of the people that are being filmed in the video, they can say that they never allowed to be filmed for the video and that can lead to further complications. This will put the creator in a lot of risk of spending lots of money and time that was spent in filming, but they will not be able to release the content because of the consent being revoked.

Getting individuals to sign the video release form and agree on all the terms and conditions is not that difficult. Specifically in the case of people who regularly appear in videos, it is very easy to get their permission, but the creator should still give explanation in detail about the kind of video they are planning to make so that the people know exactly what they are consenting to and they are comfortable with it being released to the public.

Is it necessary to have a release form for a class project?

If the video, you are making for a class project will only be shown to the people present in your class then you do not need any type of release form for that. However, if you are in a film making school and you are making a short film or documentary then it is better for you to get a release form for that and have all the parties involved sign it in advance in order to avoid any complications and frustrations in the future.

Is there a need for release form if you are making videos with some friends?

That depends on what you are planning to do with the video later. If you are making a video just to have some fun among your friends, then you most likely don’t need a video release form for that. If you are going to post it on internet, then make sure that everyone that is involved in the video is on the same page about it being uploaded on the internet. But if you are planning to make a documentary out of it or make a short film, then you definitely need a video release form so that all the people that are present in the video can consent to it being turned into a short film or documentary.

Whether you are creating a documentary, conducting an interview, or making a short film, it is necessary to have a video release form before you release the content to the public. Having a video release form will help in protecting your company and those who are featured in the video. Things and circumstances can always change in the future, so it is better for you to have a signed form from all the parties involved in order to avoid any problems and misunderstandings. I certify that I have read the foregoing release in its entirety, understand it entirely, and agree to be bound by it by signing this release. I hereby waive any and all claims I may have against any individual or group who uses this content for educational purposes.