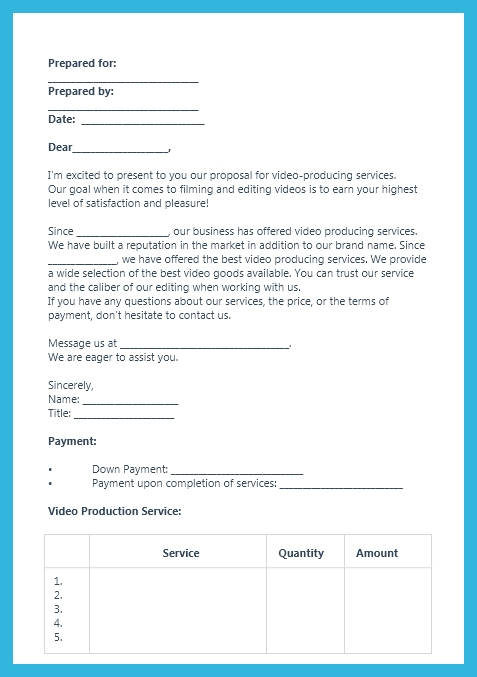 What is a Video Production Proposal?

Video production proposals usually include details about the copyrights of the final product, schedule of the video production, payment policies and any other terms and conditions that either of the side want to include.

Before finalizing a video production proposal, both parties should read everything thoroughly and make sure that the client and the video production company are on the same page about everything and there are no misunderstandings among them regarding anything. When both parties have mutual understanding about all the terms and conditions in the proposal, it will lead to a good and healthy working relationship.

Things to include in a Video Production Proposal:

Following are the things that should be included in a Video Production Proposal:

It is important to note that there should be a lawyer that can help you out and give professional advice regarding the proposal before you sign it. Whether you are the client or the videographer, seeking guidance from a lawyer is beneficial for both. Including a lawyer in the agreement will help you out in many ways. in the future if anything goes wrong, a breach of contract or a fraud, a lawyer will help you in solving the matter without complications. Since it is a legally binding contract anything that goes wrong can be taken to the court to solve without much trouble.

How to write a good video production proposal?

Here are some tips to write a good production proposal: I'm excited to present to you our proposal for video-producing services.

Our goal when it comes to filming and editing videos is to earn your highest level of satisfaction and pleasure!

Since ____________________, our business has offered video producing services. We have built a reputation in the market in addition to our brand name.

Since _______________, we have offered the best video producing services. We provide a wide selection of the best video goods available. You can trust our service and the caliber of our editing when working with us. If you have any questions about our services, the price, or the terms of payment, don't hesitate to contact us.

We are eager to assist you.

The whole terms of this agreement have been affirmed by the signatures of this contract. By signing, both parties commit to upholding all conditions of the agreement until they are either fully implemented or both parties terminate it.