An employee signs a non-compete agreement promising not to work for another employer once their employment has ended. 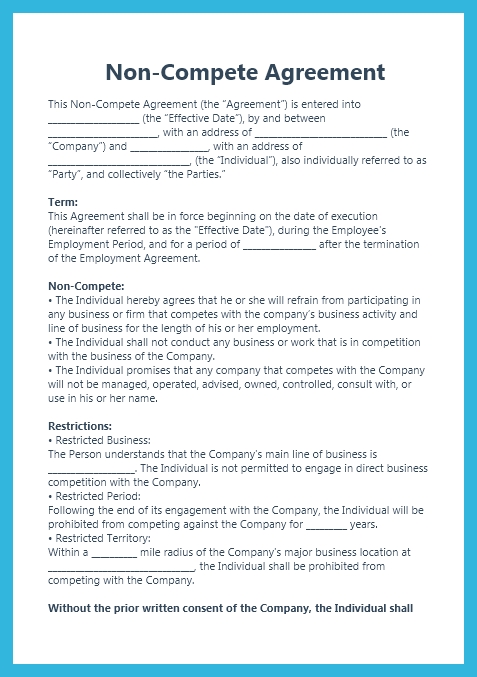 What is a Non-Compete Agreement?

A non-compete agreement can also be a clause in an employment contract. The most important part of this agreement is that it makes sure that the employee does not reveal any proprietary information or any trade secrets to any other parties during their time of employment and even after that.

A non-compete agreement also prohibits employee from entering the markets or profession that they employer considers are in direct competition with their business.

These contracts also indicate how long the employee will abstain from working with a competitor in a specific market or location. Non-compete agreement can also prevent employers from getting work in their field if they leave a position.

What type of businesses use a non-compete agreement?

Before getting into a non-compete agreement, you must know what kind of business it is that is involving you in this contract, whether it is a legitimate business or not. If it is not a legitimate business, then there is really no need to agree to these terms and the employee can do as they seem fit.

If you are asked to sign a non-compete agreement by your employer, then you should contact your lawyer for advice right away. With the help of a legal team, it will be easy for you to know whether the agreement and business is legitimate or not and that you are not jeopardizing your future by signing an agreement like that. A lawyer will make sure to read through the contract and see that the agreement isn’t overly harmful or restrictive to the employee.

When is a non-compete agreement enforced?

A non-compete agreement will be enforced when the relation between employer and their employee has ended if the employer wishes to stop the employee from competing against them in their new position.

What kind of things can be considered a competition?

In a non-compete contract following things can be considered as a competition:

Things to include in a non-compete agreement:

Following things can be included in a non-compete agreement by an employer:

Things to consider when making a non-compete agreement:

Advantages of a non-compete agreement:

There are various advantages of a non-compete agreement:

Disadvantages of a non-compete agreement:

Unlike NDA, a non-compete agreement will stop the employee from getting a job in the competitor firm. This way even if the employee has a better job option available, they will not be able to leave the company they are currently at, as long as the contract is valid. This Agreement shall be in force beginning on the date of execution (hereinafter referred to as the "Effective Date"), during the Employee's Employment Period, and for a period of ___________________ after the termination of the Employment Agreement.

Without the prior written consent of the Company, the Individual shall not, during the Restricted Period and within the Restricted Territory, directly or indirectly own, manage, operate, join, control, finance, or participate in the ownership, management, operation, control, or financing of, or be connected as an officer, director, employee, partner, principal, agent, representative, or consultant of any entity engaged in the Restricted Business.

The term "Confidential Information" refers to all technical and non-technical information provided by the Company, including but not limited to any data, files, reports, accounts, or proprietary information in any way related to products, services, processes, databases, plans, methods, research, development, programs, software, authorship, customer lists, vendor lists, suppliers, marketing and/or advertising plans, methods, reports, analyses, financial or statistical data, or any other information.

Both Parties vouch for their full legal capacity to enter into this Agreement. There will be no violations or infringements of any third party's rights, of any other agreements between the Parties, individually, and any other person, organization, or business, or of any law or governmental regulation in the performance or obligation of either Party.

All other sections should remain in full force and effect as valid and enforceable. If any provision of this Agreement is found to be invalid or unenforceable, in whole or in part, that provision shall be severed from the remainder of the Agreement.

The Parties recognize and concur that this Agreement encapsulates their whole understanding. Any changes, additions, or other modifications to the terms must be made in writing and signed by both Parties if the Parties wish to proceed.

The Parties agree to the terms and conditions set forth above as demonstrated by their signatures as follows: