A graphic design contract is an agreement between a client and a designer that is legally binding. Pricing, the scope of the design work, the deadline for deliverables (such as wireframes or final design elements), payment terms, intellectual property rights, and other legal aspects are all included. 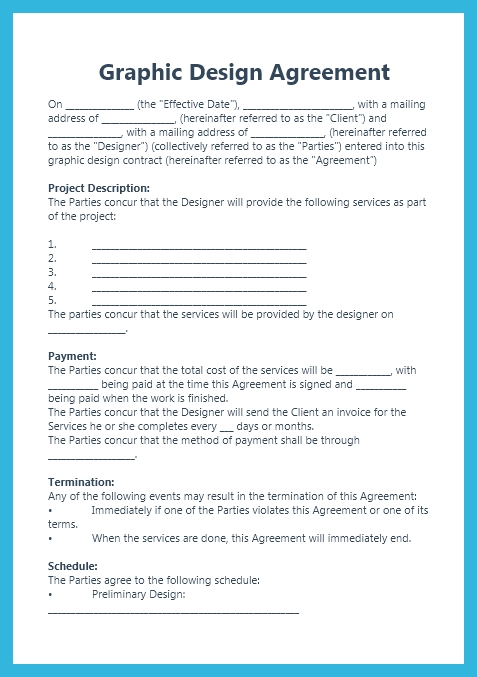 Graphic design is an essential aspect of any company or organisation. It can make or break how customers or potential customers view a company. Because of this, it is essential to have a solid contract in place between the company and the designer they choose to create their graphic designs. This document should outline the expectations of both parties and what will happen if one party fails to meet their obligations.

Taking on new clients without signing a contract is one of the most common blunders made by freelance graphic designers.

A graphic design agreement will make sure that the designer knows what they are getting into and what are the expectation of the client and whether the designer can deliver the result that the client requires or not.

As a self-employed or freelance graphic designer, it is important to have a contract draft ready for your clients as it will be beneficial for your business and help in protecting you in case anything goes wrong.

The trouble is that none of these justifications help when a problem with scope, payment, or another aspect arises.

The truth is that with the correct strategy and contract, you can easily protect yourself from a wide range of issues.

Keep in mind that a graphic designer contract is a legally binding agreement so there should be a member of legal team present at the time of contract signing so that the lawyer can guide both parties about the seriousness of breach of contract and how to negotiate and agree on the terms and conditions of the contract.

Why is a graphic designer contract important?

Design work is very risky, and it places the designer at a very dangerous and stressful position because of the expectation of the client. Without having a contract any kind of problem can arise in the future. Once the designer has listed their terms and showed the client their previous work, they can relax a bit as they have a singed contract by which the client cannot be displeased with the results of the work.

A graphic designer will protect the artist in case the client is refusing to pay, or they ask the artist to do more work than mentioned in the contract, in such cases the designer can simply refuse and take legal action against the client as it is a breach of contract.

Things to include in a graphic designer contract:

When drafting a graphic designer contract, you should keep in mind the following things:

Problems that can arise:

There are lots of risky factors to consider when you are signing a graphic designer contract specially in case for the artist. So, the artist should have some idea about what kind of problems can arise and how they can handle it?

A graphic designer contract should include all the ifs and buts in order to avoid getting in any type of trouble or fraud during the time period of contract and after that. As a client you should make sure that the designer have granted you the rights to display their work wherever and whenever you want and as the designer you should make sure that the client gives you the credit where it is due. referred to as the "Agreement”)

The Parties concur that the Designer will provide the following services as part of the project:

completes every ___ days or months.

Any of the following events may result in the termination of this Agreement:

The Parties agree to the following schedule:

Before the project's completion, the client must approve all materials. The client is granted ___ modifications. Any modifications made after ___ will incur a $______ fee.

The Parties concur that the Client shall retain ownership of all work produced by the Designer while rendering the services, and shall be entitled to unrestricted use of such work.

The Designer guarantees to carry out the Services outlined in this Agreement following the demands and guidelines of the Client. The Designer does not guarantee that the services covered by this Agreement will increase sales, brand recognition, visibility, profits, or any other kind of gain. In addition to the aforementioned, the Designer has no obligation to the Client should the given work fail to produce the expected outcomes.

Under no circumstances, including for breach of contract, tort, negligence, or other causes of action, shall either party be liable for any indirect, special, consequential, or punitive damages (including lost profits) arising out of or connected with this Agreement or the transactions it contemplates.

All other sections should remain in full force and effect as valid and enforceable. If any provision of this Agreement is found to be invalid or unenforceable, in whole or in part, that provision shall be severed from the remainder of the Agreement.

This Agreement supersedes all earlier agreements, understandings, inducements, and conditions, express or implied, oral or written, of any sort whatsoever concerning its subject matter. It comprises the full agreement and understanding of the Parties to it. Any practice or custom of the trade that conflicts with any of the Agreement's specific terms is superseded by and subject to the express terms of the Agreement.

The following signatures from the Parties show that they concur with the terms and conditions stated above: